Once you can easily fill out this worksheet, you'll get way more out of Fretboard Toolboxes!  Watch my Long, Boring Building Chords & Scales Video below for help getting started.  :-) 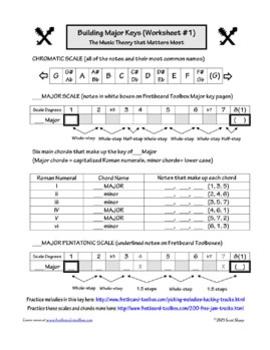 When you know the scale degrees & chord Roman numerals of one of these keys by heart, click here to work on playing common melodies along with backing tracks using our free Picking Melodies Workbook.  This builds lots of muscle memory within a key!

Scroll all the way down for answer keys!

​​​Chromatic Scale: All of the possible notes in order, skipping none.

Major Scale: THE seven note scale that makes up the backbone of Western music

​Whole-step: The distance between two notes where you skip a note in between.

Half-step: The distance between two notes where you don't skip a note in between.

Chord notes: Each Major and minor chord is always made of the same notes, on ALL INSTRUMENTS!

​ Major Pentatonic Scale: ​This is a VERY common five note scale that works great for improvising, so it's well worth learning!