BIG IDEA 1: Learn the six main chords that make up some of the most common keys, starting with C Major

BIG IDEA 3: Practice playing each Major scale and Major pentatonic scale along with the chord progressions

To see the chords, progressions, and scales all over your instrument, check out Fretboard Toolbox Essential

and Complete books by going to "Pick Your Instrument" above. The page numbers for each edition are shown in the Mastering Keys Checklist, and you can learn all about the differences between the two versions here.

your instrument from the "Pick Your Instrument" tab above, and then clicking "LOOK INSIDE" for any edition

and watch what happens when you can see the note locations of each key all over your fretboard\! 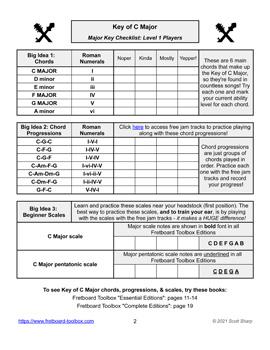 Learning the chords, chord progressions, and scales that make up the

most common keys makes an ENORMOUS difference in your playing!!