Note the intense concentration as I'm playing (I'm on the left), while my buddy Paul is cool as a cucumber.  Paul's wired to be a natural musician, but I'm the kind who needs to SEE the big picture- which is just why I created Fretboard Toolboxes!

I didn't start playing anything until I first picked up a guitar my senior year of college in 1999 at the University of Kansas in Lawrence, KS.  Soon I was starting my career as a high school AP Biology/Anatomy/Natural History teacher, and by then I had grown pretty frustrated with never seeming to play any better. I spent the next 10 years picking up my guitar on and off, but more off than on. Over the years, I'd take the occasional lesson, but being a big picture guy, the lessons all felt like random ideas without any way to see the connections.  Even in my early years as a teacher, I knew that this wasn't the way most folks learn best. 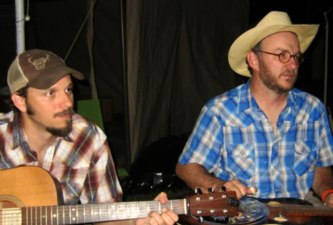 In 2009,  I was lucky enough to have a really cool student named Trey who was the first person who ever introduced me to any kind of music theory.  One day he was playing his guitar in my classroom after school when he dropped a bombshell on me when he told me that certain chords go together in each key.  He wrote out the seven chords that make up the key of G Major on a notecard, and my mind was blown!  I started thinking about all of these songs that I played (in what I now know is the key of G Major), and they fit so perfectly!  I discovered that so many chords & melodies could be predictable if I could find a way to understand keys.   After he showed me the chords of a couple more Major keys, he mentioned that certain scales work in each key.   I started making more and more connections, and then, spurred to invent something by a Ben Franklin biography I was reading, I set about creating my first Fretboard Toolbox- a slide rule for guitar showing the chords of each Major key.

Since 2009 when I made my first Fretboard Toolbox, they have gone through at least 7 different rewrites as I've learned more and more about what music theory really matters the most.   As of now, I've created Essential & Complete Toolbox versions for 8+ instruments, along with so many free tools on this website, and over 100 videos on my YouTube channel showing how Toolboxes work.   By most accounts, I've gone off the deep end.  :-)  However, creating Fretboard Toolboxes has given me the opportunity to meet thousands of awesome folks and learn more than I ever dreamed about music.  It's also allowed me to turn tools that I originally made to help me understand music better into a really fun business!  Best of all, I get the opportunity to teach all these musical ideas as I'm learning them to folks all over the world; and of all my passions, teaching is by far my most cherished.  :-)

Years of teaching have shown me that most people learn best when 1) they can see the big ideas that underlie any field of study and 2) they're given the tools to make those big picture connections on their own.  Fretboard Toolboxes continue to do both of those for me, and if that kind of deeper understanding is what you're looking for, I hope you find that they do the same for you!