To develop muscle & ear memory for the "music theory that matters most",  devote lots of time to these ideas:

Click "Look Inside!" or the cover for free preview pages!

This book works with any instrument!

Click a key below for free backing tracks at

The goal of this Interactive E-Book is to provide a tool to help players start seeing how melodies and chords relate to each other, which has literally opened up the world of music for me! From the time that I first started seeing these interactions, by practicing these tunes in the most common keys (G Major, A Major, C Major, D Major, and E Major), it has made learning new songs faster and faster, and it has made my fingers "fall" on the right noteway more often. Though these songs may seem overly simple at first glance, the melodies and chords in these songs form the basis of nearly ALL Western music. Get the chords and melodies down for these songs, in different keys, and I think you'll be amazed at all of the cool ideas start opening up for you in all sorts of songs you play! 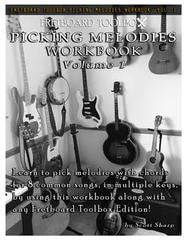 All of the free backing tracks were played by me at home with my family and dog running about, and each track was played straight through, so I accept all responsibility for any strange noises or mistakes you hear during the recordings!  :-)

1. Begin with a key to the left that you commonly play in, and practice/memorize all 8 melodies in that key.

2. Choose a speed and practice playing each song's chords while singing or humming the melody.

1. Start with a reasonable speed for you, and build up speed with each melody using the backing tracks.

2. Figure out each melody up the neck, in different keys, with the backing tracks.

1. Practice adding melodies while you play the chords.

2. Improvise on the melodies by adding in blues notes(flat-3 & flat-7 notes: b3 & b7), but work hard on keeping the melody alive!